Over the past decade, Jess Meoni and Bobby Keller have organized all types of shows and events in the area, including the Scranton and Zinefest Punk Rock Flea Market and the NEPA Horror Film Festival, respectively. After combining the two into one last year, they’ve decided to do it twice this year, starting with Spooky Summer in June. The film festival and the flea market will be back this Saturday, October 16 at Drive-In Circle Theater in Dickson City.

“I’ve had the idea for Spooky Summer for a few years. Originally, these were former Nickelodeon stars who met and greeted each other at Ale Mary’s [in Scranton], and it was going to have a different name, but it fell apart. The only good part of it was that I told “Gary” about “Are You Afraid of the Dark?” on the phone while dining at a restaurant in Canada, and I texted my childhood TV crush, Alisa Reyes. She stopped talking to me after I argued with her manager. But yeah, that shit never happened, ”Keller recalls.

“Since I came back to Scranton after leaving Long Island’s ‘Muppet Baby’ milkshake, I have had a lot more time to organize events in the area. And besides with the pandemic, we really wanted to help local musicians and local bands and give them a place to perform. Since we had all of this outside ground at the drive-in, we really wanted to take advantage of it and do our part to help “the local scene”. However, some groups were still complaining. Are you fucking shocked? “

“Before joining our events, I was hosting the Scranton Punk Rock Flea & Zinefest up to three times a year at one point, but at a much smaller capacity. Since 2011, my event took place in June, so for me it made sense to connect with Bobby’s idea for Spooky Summer, ”Meoni explained.

“I guess it’s just fun to do. It’s a lot of logistical gymnastics, but in the end it’s fun to have something to look forward to in the warmer months as well as October. We like to be scary all year round anyway.

As they tirelessly promote these events, they get asked many of the same questions year after year, so to celebrate the seventh year of NEPA Horror Film Fest and interrupt their mini press tour for a bit, we asked them seven fun and personal questions, get to know them better while giving them a little respite before the crazy weekend ahead.

NEPA SCENE: How would you have a perfect weekend?

BOBBY KELLER: My ideal weekend would be to work in a dunk tank as an insulting clown in a real shit carnival.

JESS MEONI: My ideal weekend is what I have been doing for most of my life. I like to hang out with my friends and see their band perform or perform myself on stage. I never really get tired of it. Of course, I also like to go to bigger concerts when I can and hang out in the city they’re in. I also really enjoy staying home and watching endless hours of trashy TV.

NS: What is your favorite food? What do you wash it with and what’s for dessert?

BK: Maroni’s pizza [in Scranton] with a can of Root Beer Diet Barq. Probably a 5th Avenue bar for dessert.

JM: It’s really hard not to say pizza. The first thing that usually comes to mind is Andy’s pizza in Peckville, although I’m pretty sure I can eat a whole platter of from Arcaro [in Taylor] all alone. i also like Mamoun Falafel in New York and pineapple rice from Thai Rak Thai [in Scranton]. You will almost always find me ordering either a Diet Pepsi or a Whiskey Sour, but I also really like Crystal Club Swiss Creme Soda and RC Cola. For dessert, I like the Moon Pies.

NS: What’s your favorite T-shirt that you currently own and wear a lot?

BK: I unfortunately sold most of my t-shirt collection. I collected vintage promotional shirts from horror movies from the 70s, 80s and 90s. I still have an original 1978 “Dawn of the Dead” shirt, the same one that Cliff Burton wore. It will probably always be my favorite. I’m still pissed off that I sold my “People Under the Stairs” shirt that I wore at the film festival last year.

JM: My favorite t-shirt is probably the Burial fog shirt that I screen printed, but I also really like this Chastity belt shirt that I bought when I discovered them a few years ago.

NS: What’s the last great horror movie you watched that you would recommend?

BK: I watched “Son of the Blob” last night and I’m shocked more people aren’t talking about how serious this movie is. If you’re a nerdy “unaware of yourself”, “so bad as it is good” horror fan, this is absolutely fantastic. As for recent movies, I think the last one I really enjoyed was “Get Out”. Can I tell you which movie the fuck I hate? The 2018 Halloween Blumhouse.

JM: I saw Nia DaCosta’s “Candyman” this year and the acting struck me as a little hollow emotionally. As soon as I got home I had to see the original again, so I would probably say the 1992 original “Candyman” was the last good horror movie I watched. As for a more recent movie, I really enjoyed the psychological horror “Neon Demon” of 2016. I would recommend it because the whole story unfolds in a very unusual way, and I think that surprises the spectator as he advances. 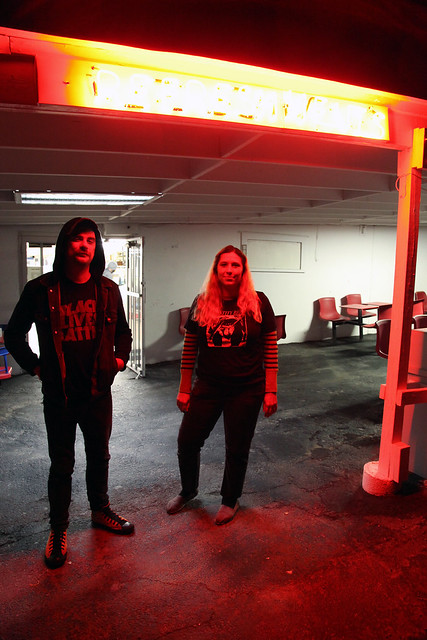 NS: If you could show a double drive-in movie you wanted, what would the movies be?

JM: We had a lot of double nights at our friend’s house all summer. I think it would be cool to show something like a Mia Farrow party of “Rosemary’s Baby” and “The Haunting of Julia”, which was filmed a little over a decade after the premiere.

NS: You’re both in local bands, so tell us about them and why you like to make music.

BK: I play in Christ Chopper. We’ve been playing together since January of this year but still haven’t played a concert. Half of the group get sick and ended up canceling our first and second shows. I love playing with these guys because they are all extremely talented and we are all friends. To have complete freedom as an artist and not have to write music with crazy people who take themselves too seriously is fantastic. I can’t wait to write more music and possibly perform live with Christ Chopper.

JM: I am the drummer of swamp woman, a group that was born a bit by accident. After searching online for the TV show “Wife Swap” and mistakenly typing “Swamp”, I guess a typo turned into a group. With so many willing musician friends, dreams can come true at some point. I have been playing drums for about 15 years since high school in another band called Satellite. Wife Swamp plays sludge punk metal style, but I come from a psychedelic garage punk and surf rock background. My current group has been together for about three years now. I like to play in a band because music has always been a part of my life even before I was a teenager. I love all aspects of being in a band, even beyond the game, but also the screen printing of products, hanging flyers, and show bookings.

NS: How do you personally define punk rock? What does this mean to you?

BK: Punk rock is a feeling and an attitude that I believe people were born with. It’s not fashion, it’s not a certain sound. You don’t have to jump like a gangly bitch with a mohawk and a certain outfit to be punk rock – it’s not that there is anything wrong with jumping like a gangly bitch. I’ve been the miserable old man at the back of the auditorium since I was 13. [laughs] Seriously, it’s just something that comes from your heart that’s genuine and beautiful and it’s hard to express. I’m not very good at describing the things I love – I’m only good at tearing up shit and stupid stuff.

JM: Coming from a line of musicians, I discovered punk rock quite early on, although most of my family was really passionate about heavy metal. I read and watched documentaries a lot growing up, especially on civil and social movements, and it inspired me that punk culture seemed to radiate this unabashed freedom to accept being different and this empowerment to challenge. question the standard. I liked that it was often motivated by revealing political, environmental or racial injustices, raising issues that I found important. Ultimately, punk rock has always been about DIY ethics for me – creating something from nothing, learning along the way, and going through trial and error in the making, but I think by building our own community of musicians, artists, organizers, and venues, we can stabilize a platform where this ethic can thrive.

Rich is an award-winning journalist, longtime blogger, photographer, and podcast host. He is the founder and editor-in-chief of NEPA Scene.