In October, Bob Edmands of the same music weekly reflected on his second single, “Nasty Nasty.” “The lyrics and the riff go by at breakneck speed, so fast that everyone involved seems to have lost control. It should be awesome, in a wildly perverse way, but it isn’t.

999’s place in the 1977 UK punk narrative is not cut and dried. Paul Morley described them as “heavy-pop” in February 1978. They looked modern sharp, akin to a more colorful version of pre-army Clash style gear. As the critics above acknowledge, they provoked strong reactions. At the center of it was the voice of frontman Nick Cash. High-pitched and piercing, it was not Robert Plant’s rock scream but a more idiosyncratic device. Nevertheless, they released an unbroken string of great singles that were still fresh: “I’m Alive”, “Nasty Nasty”, “Emergency”, “Me and my Desire”, “Feelin’ Alright With the Crew”, “Homicide” – until the end of 1978, 999 delivered. Their first album, released in April 1978, was uneven but it is a follow-up, that of November 1978 Separate, was stronger.

After that, a linear path dissolved as they moved from label to label and, in the spring of 1979, began to focus on America with the first of a series of tours there. The dates in the title of the double-CD set A punk rock anthology (1977-2020) confirm that the story is ongoing although it is the early years that count: these are summed up by tracks 1 to 14 of disc one. That said, the 1981 single “Obsessed” is pretty hot.

999’s track record is remarkable. Their drummer Paul Buck – who traded as Pablo LaBritain – was at boarding school with the student who would be 101’ers pub-rock frontman Joe Strummer, and was briefly in a rehearsal-only version of the next Strummer The Clash outfit in June 1976 Buck was very aware that the punk stuff was on the horizon. 999 frontman Nick Cash was Keith Lucas and as such from 1971 was in Ian Dury’s Kilburn and the High Roads, the original version of which died out in June 1975. Lucas had been taught at Canterbury College of Art by Dury. He would also have known where the pop-cultural winds were blowing. So 999 was biographically a bit like The Clash, a band fronted by another former pub rocker. 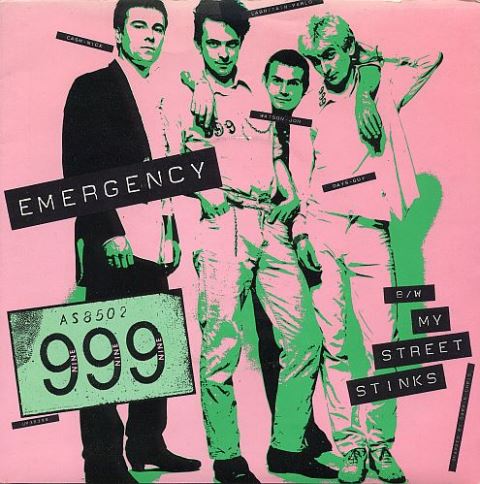 But despite their early awareness of what was written in the punk-rock runes, 999 took a little while to get going. Their first show was on January 22, 1977, and Lucas went by the name Gene Carsons for a while before becoming Nick Cash. The group was initially called The Dials, then 48 Hours after The Clash and then The Fanatics. On May 14, 1977, they performed as 999 for the first time and soon began touring. They bonded: Albion’s booking agency picked them up and after the indie show “I’m Alive” they signed with United Artists, home of the Stranglers (another Albion client) and Buzzcocks.

It wasn’t obvious at the time, but there were musical nods to Lucas/Cash’s past. Their songs “I’m Alive” and “Quite Disappointing” (the A and B sides of their debut single) were in Kilburns’ repertoire – presumably played without the rush of the 1977 recordings. “Emergency” was also a song from the Kilburns period, which Lucas/Cash had written with his brother – who was Guy Days, the future guitarist of 999.

Above all this dialogue between past and present looms the formidable 999 singles made shortly after they started surging forward. There have been endless compilations, but the simple A punk rock anthology (1977-2020) is a good entry point.

Previous Who was Andy J Chaves as Katastro bandmate dies aged 32?
Next Photos from the concert: The American Band inducted into the RI Music Hall of Fame